Dealing with loneliness in marriage  is one of the most frequent goals I hear from those seeking couples counseling. Perhaps you have felt lonely in your marriage when your partner is on the phone with business issues during family time; too busy with social commitments or too tired and zonked out to be present with you. It’s easy to feel lonely in your marriage when your partner is there is body but doesn’t seem to be in spirit. It makes you wonder whether you are still attractive, desirable, interesting and most of all likable and lovable.

Dealing with loneliness in a marriage is a very discouraging experience. Ella a 30-year-old home maker with 3-year-old twin boys often went to bed in tears, feeling lonely in her marriage, whether her 33-year-old husband Troy was there beside her or not. If he was there, he was asleep and snoring the minute he got into bed. If he was on a business trip, he rarely checked in with Ella before bed time, complaining of being wiped! Ella felt that she had no companion, no confidant, and no special friend she could have a laugh with, relax with or vent with.

Dealing with loneliness in marriage didn’t make sense to Ella. The discrepancy pumped her up to make a huge effort with her husband, to tempt him into having time together where they could just hang out and feel the bonds of connection – just as they had during their engagement, when Troy would call her at night from his travels. Ella never felt lonely then, even when they were forced apart due to his business duties. But something had shifted after they married, before the twins were born. It was as if Troy didn’t feel the need to be best friends and confidants any more. That’s when Ella’s loneliness put a pall on their marriage.

Troy had no idea that Ella was dealing with loneliness in marriage. When he played the father and husband role, Ella tried hard to tell him how alone and lonely she felt in the marriage, but he reacted as if she was crazy. He felt insulted and accused her of not appreciating his hard work that allowed them to have the life style they enjoyed, while sending their kids to an exclusive preschool.

For a time, Ella worked hard trying to reignite their once precious companionship, desperate not to feel the same loneliness she felt as a child when her parents worked in their store, forgetting her birthday, and dismissing her need for reassurance at night, when the ‘monsters’ came. But when her boys were 8 years old, she found herself giving up. Dealing with loneliness in her marriage felt too much to bear. She went into a depression that numbed her from feeling anything. She no longer longed for that companionship and confidant. She buried her feelings and became an efficient robotic mother and wife – until her kids were being affected and she came to depression counseling and found a way of valuing herself enough to tackle her husband from a place of self-empowerment.

Dealing with Loneliness in a marriage prevents, anxiety, insomnia and physical pain

Three years into his marriage, 30-year-old Ken, a high school social studies teacher was disheartened. He was lonely and married, unthinkable just 2 years ago when he took his vows.  He no longer looked forward to going home after his work day. All he had in store was Mallory his wife who was there is body but Ken felt her absent in spirit. Even if she was right by his side on the sofa watching TV, or at the dinner table eating their evening meal, he was lonely and married!

Lonely and married made Ken feel that Mallory’s questions about his students and projects he was leading were inauthentic. He felt she was just going through the motions, and didn’t really care what he said. When they went out together with his colleagues or friends, he felt separate from Mallory. Was he just an appendage, or someone she loves to hang with? She rarely chose to dance with him at parties, and if she did it was to fulfil a ritual – lonely and married, Ken felt loneliest when he held her while they danced, as if she were a large doll!

There were rare times when Mallory sought Ken out in a playful way. At those times she immersed herself in the moment with him. It was heaven for Ken. He wanted more, but he wasn’t in control of when Mallory would be in the mood for it. The stress and uncertainty of waiting for that connection produced an enormous amount of tension in Ken’s body. Dealing with loneliness in his marriage meant that he suffered neck pain while teaching, and was overwhelmed with anxiety attacks during the weekends. It took his focus away from the loneliness of his marriage. Unfortunately the constant rush of adrenaline of his panic attacks kept him away at night – alone, lonely and married.

Dealing with loneliness in marriage – that’s what Ken’s parents settled for.

Ken was one of four children in a family where his parents played their roles well, but they had little emotional connection. They acted like business partners making sure the company ran well and everyone did their duties. Ken never saw them joke with each other, be playful or enjoy leisure time together. His father had his sports hobbies and his mother had her ladies groups. But he had an aunt and uncle who demonstrated real pleasure in each other’s company. There was an easiness that they had with each other that penetrated Ken’s heart. It’s what he was going to have when he got married. But he ended up with a version of his parents’ marriage, much to his disappointment and despair. Fearful of not being able to perform his duties as a teacher, Ken entered into anxiety counseling and learned to be more assertive in his marriage, and get what he needed. 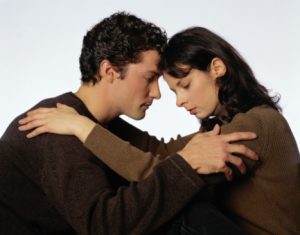 Loneliness in marriage doesn’t just happen out of the blue. It’s not a new feeling for the lonely partner, nor one that can be easily overcome – unless you are willing to explore the roots of that deep lonely feeling. As with Ken and Ella, loneliness in marriage came from feeling lonely as a child and or watching your own parents exist within a lonely marriage. However it happened, unless you recognize that your template of married/family life is one of loneliness, then you will remain in that place. But if you enter into Family of Origin counseling, and free yourself from those family norms, you will burst out of that template and create a less lonely and more connected marriage.

The five Biggest Love Myths that Underpin Your Unhappiness