Inability to trust keeps them shut down

Do you have a solid basic trust that your partner will share in your experience when you express something important? What’s the first image that comes into your mind when you imagine sharing your feelings or opinion? If it’s one of deflation, then you are missing  the second most important feature of having the capacity to truly love, which is basic trust in the humanity of the other.

Are you suspicious of your partner’s sincerity and genuineness when they are being ‘nice’ or generous?

May be you are exasperated with your partner constantly doubting you and your motives, to the point of giving up on the attempt to connect and enjoy emotional intimacy.

I bet that you have been in countless situations where you have made a real effort to listen and be supportive, but got received as if you were a fake. That hurt you and made you wonder “ what’s the point?” That basic trust you need to act on your desire is absent.

It’s just as likely that your partner experiences you that way too.  Perhaps when you resist an attempt on their part to be affectionate because you view them as being manipulative or self-serving, then your partner, just like you did, feels hurt , dejected and chooses to give up. Your partner lacks the basic trust in your humanity to risk sharing stuff with you.

If you find yourself censoring every thought and action so as not to offend your partner, then you are not free to be yourself.  You don’t trust that your partner will be okay and comfortable with you as you are – in the raw. Similarly your partner doesn’t feel he or she can trust you to accept her or him to be fine with how they conduct themselves, eat, dress shop etc. Most of all, neither of you feel you can let your hair down and be human. You always have to be somewhat perfect or else you won’t be accepted or loved by one and other.

When one or both partners can’t rely on and trust that they can mess up, be awkward and stinky, dumb and incorrigible from time to time, there is a lack of trust in one and others basic humanity. That scenario fosters insecurity and prevents love from finding a fertile ground to grow.

Jackie told me how angry and hurt she was when Matt didn’t like her to go out with her friends.  But the thought of telling Matt that she was hurt by his remarks sparked a big fear inside her. She reeled out a whole slew of imaginary happenings such as that he would get mad and not speak to her for days; or that he would accuse her of being immature and irresponsible; or even that he would hate her and then the entire marriage would be in jeopardy. She didn’t trust that he experience her hurt as legitimate, and so she didn’t want to put herself in a vulnerable position.

Matt was upset that his stringent efforts to get up every day and put his family first by getting deals done wasn’t met with gratitude and appreciation. It was a stab in the back for him that Jackie would chose an evening with friends rather than being with him and enjoying him. I encouraged him to tell Jackie how her wanting to go out with friends made him feel anxious, rejected, excluded, inadequate and unlovable. But he wouldn’t. He was very fearful that she would experience him as a foolish, clingy child who needed to grow up. He didn’t trust that she would empathize with him, understand his longing to be ‘chosen’ as her one and only and be over the moon to be with him at every opportunity – something he was denied as a child.

Since neither of them were willing to open up about their feelings of hurt, they were deprived of the chance to empathize. Without empathy,  seeing each other as human and forgiving their human errors was not in the cards. They were stuck in the arena of attempting to be the ‘perfect’ or ‘ideal’ spouse even though they couldn’t do so and resented it. They were doomed to keep experiencing each other as having bad intentions and needing to protect themselves accordingly – the seeds of paranoia.

So you can see that both Matt and Jackie had trouble feeling that basic trust that is necessary for true love to a reliable part of the relationship. 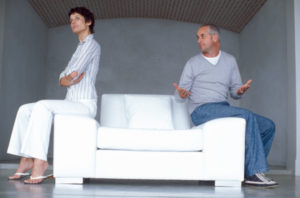 Doubt that your partner is okay with you

When they came to therapy it was obvious that neither trusted one another. When Matt said that he would be okay with Jackie seeing her friends once every 2 weeks, she dismissed it as him trying to show me the therapist that she was the reasonable and generous one. She didn’t believe that he was trying to give her room to be herself. When Jackie told Matt that she really valued his hard work, and wanted to go out with him and have fun, he screwed up his face and his body moved away from hers. He didn’t believe that she really wanted to be with him. He interpreted it as her trying to get him to be okay with going out so that she could then migrate to being with friends, leaving him alone again.

Jackie was hurt that her genuine good intentions were maligned, just as Matt felt about his attempts to let his wife be herself.  As I drew their attention to their mutual hurt for the exact same reason, over and over again in therapy, they began to be more interested in each others experience. When I encouraged them to share how suffocating they felt trying to be perfect, they began to consider how much better it would be if they could trust that by being themselves it wouldn’t dissolve their relationship.

Next I asked Matt and Jackie to tell their stories of how they had been let down growing up, and how difficult it was to trust that their parents would still love them if they were disobedient or didn’t think in exactly the same ways. Having been heard and understood by me in individual counseling, each of them were less fearful of being dismissed or mocked. Slowly they talked about the pain of being ignored, of feeling inadequate and of longing to be honored for who they were – their basic humanity. Both Matt and Jackie softened. Having been accepted and cared for just for who they were by me in their individual work, they now had a chance to do the same for their partners. It was a big risk, but it was worth it. They each felt some empathy and began to connect through their mutual pain.

As Matt and Jackie developed a stronger connection and interest in each others pain rather than experience their spouses as unreasonable or suffocating, an element of basic trust grew. It was tenuous and delicate, easily damaged at the slightest misstep. At those times it was hard to forgive. But those moments became less frequent as the couple persisted in trying to be themselves and have it be okay in the relationship. As the pressure to be perfect in order to please their spouses lessened so did their mistrust of each other. Safe enough to be human with all the mess that entails, Matt and Jackie began to appreciate each other in new and spacious ways. They discovered the gems within one another that had previously hidden under the mantle of trying to be something they were not. Fresh love, joy and trust in their humanity pulled them together.

The capacity to Love: 5 attributes

Three ways to manage the anxiety about pleasing loved ones