Home/Family Counseing, Parenting Counseling/Is it Okay to Fight in Front of the Kids?
Previous Next

What’s behind this guideline that you should never fight in front of the kids?

Others say it teaches kids to become fighters themselves.

There are those that say it makes children more resilient and ready for the harsh world they will face as adults.

But few distinguish between permanent unresolved family conflict, and normal family conflict that gets resolved with appropriate repair, and forgiveness.

Six year old Nadine and her ten-year old brother Julian were used to their parents arguing around dinner time most nights. The children dreaded the family evening meal. Anxiety about what would trigger fights between their tense parents filled their bellies, making real food unpalatable. Julian often tried to get his parents to focus on something else even if it meant making himself the bad guy. It was better for him to get scolded for spilling the juice than to hear the tone of his parents’ voices when they attacked each other for the same things over and over again. Fighting in front of the kids made them adopt the adult role and attempt to bring their parents to heel.

After dinner the atmosphere was usually thick with tension, because the parents’ feud was on pause. The children tried to escape by watching television or playing video games until their mom started to the call to get their pajamas on and brush their teeth. Their dad invariably began accusing their mother of being an ogre and once again they would go at it. Fighting in front of the kids was just another round of theater that the parents acted out in their power struggle.

Day after day it was the same. The children never saw either parent feel bad for hurting the other or make any attempt to reconcile.  Even if they didn’t yell accusations and demand consequences, the parents acted contemptuously toward one another in the way they walked by each other, the looks they gave one another and the stressed body posture that screamed out their disharmony.

Fighting in front of the kids where there is no attempt to humanize, empathize and reconnect, makes the kids feel helpless and unable to manage their stress. They can’t trust their parents to take care of them emotionally because their parents can’t take care of their own emotions. Living in such an atmosphere causes chronic stress and does long term emotional and social damage to the children. So for this type of high conflict-no repair household – do not fight in front of the kids, but don’t pretend either. Family counseling would be a good option to go for so that everyone had a window into the issues and developed healthy ways of communicating about them. 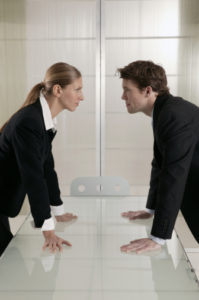 How do these high conflict-no resolution children conduct their social relationships when they are adults?

Research in the Journal Future of Children, 2005 shows that in high conflict homes, where there is no respite or resolution children grow up handicapped in their interpersonal relationships.  They are wired to search for cues that depict anger and hostility in others, feel the need to defend and use the attack as the best means of doing so. A report in the Journal of Family Psychology, 2015 found that the brains of children from in ‘high conflict/no resolution’ homes processed emotions on other people’s faces differently than those from ‘low conflict/repair homes’. They were more vigilant, saw more threat and therefore needed to be more defensive. This type of social processing make relationships strained and difficult to maintain.

Twelve-year old Justine and her eight-year-old brother Sean looked forward to their family dinner most school nights. They got to share what happened to them in their day, and they loved hearing what their parents had been up to while they were at school. But there were periods of time when their parents seemed to be at odds, stiff and formal with one another. Dinner wasn’t a happy time during those days. Their mom was short tempered and snappy with them. Their dad was silent with fury, refusing to speak to anyone – making the kids feel as if they might have done something wrong. Their parents were fighting in front of the kids, but in a more passive aggressive manner. As dinner came to an end in heavy silence, mom engaged dad by asking him about his pet project and the kids saw him slowly melt. Other times, dad reached out to mom by saying he liked her cooking and was sorry for misunderstanding her motives for wanting to spend the weekend with her mother.

Sometimes the parents would fight in front of the kids in the car when they were all going to the store at the weekend. The children became afraid that of getting in an accident. Sean tried to get his mother’s attention to break up the fight, but got shouted down. By the time they reached their destination, mom and dad had stopped attacking each other. They felt the distance between them and wanted to get closer, do their shopping as a unified team and heal the tears that had emerged in their argument. The issue they were arguing about was far less important than the need to reconnect, repair, forgive, and feel secure as a couple again. The family could nurture one another and express gratitude for one and other.

How do these ‘low conflict- repair/ forgive’  children conduct their social relationships when they are adults?

When parents fight in front of their kids, but then reconnect soon after,  their children experience less chronic long term stress. These children become resilient because they are being inoculated against arguments and fighting. They see conflict as part of family life – but that it reparative and often healing when their parents reunite in ways that make room for differences between them.

Families that don’t fight in front of the kids keep all the mess inside, festering and rotting until it destroys everyone with a lack of fresh air. No one can be themselves. Everyone is bound by and dependent on the family system, rather than growing individually while keeping nurturing connections.

Fighting and arguing in families is healthy – everyone is struggling to find the balance between asserting their individually and keeping close but not suffocated or constrained. So fighting is a way of shaking things up to keep that delicate balance – it is not destructive of the individual nor the family bonds. It’s the propensity to repair, heal and forgive that count.

So yes, be normal and fight, but feel the loss of emotional nurturing when you do – aim for reparation, owning your part, understanding and empathizing. DO THAT IN FRONT OF YOUR KIDS AND YOU SET THEM UP TO HAVE HEALTHY RELATIONSHIPS IN THE FUTURE.

Three ways to discuss finances and keep the relationship smooth