Home/Family Counseing, Parenting Counseling/Is It Okay to Fight In Front of the Children?
Previous Next

Is it Okay to Fight in Front of the Children?

Ever wonder what’s behind this guideline that you should never fight in front of the children?

Others say it teaches kids to fight themselves

Child psychologists suggest that the emotional climate becomes so toxic if you fight in front of the children that the kids become very insecure, and stressed, always vigilant about when the next fight could arise, putting them in a permanent state of hyper-arousal. Later this chronic stress lowers their immune system.

Everyone agrees that children who are exposed to parental fighting without resolution are likely to have trouble making lasting romantic relationships as adults.

I hear you saying to yourself, “well, my parents fought in front of me and my siblings all the time. It was part of the scenery and I turned out all right!”

You may feel okay because your experience matches your childhood norm, but it’s likely that you are not aware of how you coped and survived the anger, hostility, contempt and lack of compromise. When parents fight in front of the children and it becomes the ‘normal’ way of interacting, children find different ways of coping. Some soak it up in an effort to reduce the tensions, while others act out to distract their parents from fighting. Another segment use substances or escape into school work, music or sport. Whatever way they find to survive the helplessness of witnessing their parents fight in front of the children, they become more sensitive and vulnerable to interactions where those helpless feelings may be evoked again. 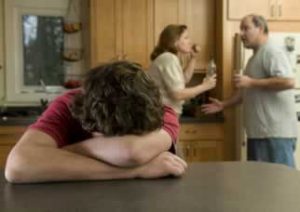 Research evidence reported in the Journal of Family Psychology, 2015, shows that children respond differently depending on whether they grow up in high conflict versus low conflict atmospheres. Those who come from high conflict homes become vigilant to signs of interpersonal emotion. Any change or slight shift alerts their brains to the possibility of fights beginning and or escalating. They are especially alert to emotions of anger, fear and agitation. In other words when parents fight in front of these kids their brains are on alert for danger in interpersonal relations. In high conflict homes when parents fight in front of their children and there is no resolution, the kids are primed for stressful experiences. They become chronically stressed and view all other relationships at school and later in life through the lens of possible conflict so that they are always prepared and protected.

I worked with Joe, a man who was always on guard. He perceived any and every one he came into contact with as possibly hostile when they were the slightest bit uneasy. It was hard for him to believe that his wife’s fatigue wasn’t a precursor of her critical and accusatory attitude towards him.  Joe came from a home where his father and mother were constantly in battle; just as his father and grandfather had been previously. The fights often got physical and Joe was permanently scared. Sometimes he tried to protect his mother; other times he needed his mother to protect him. But she was too worn out from fighting her husband to notice Joe’s fears.  His parents never made up after a fight; they mocked and hurled accusations at one another when they were not acting as if the other one didn’t exist, until Joe’s mother left when he was a teenager, having found another partner. He was on permanent alert as a child, perceiving other kids at school as potential threats. It took years of therapy for him to reduce his threat alert and experience me, his wife and his colleagues as well-meaning.

Children who grow up in low conflict homes where there is resolution after the parents fight in front of the kids, are less primed for danger and don’t immediately armor up, expecting the worst. Their brains are not heightened for bad outcomes. Their parents found ways of coming together, making up and compromising after fighting in front of the children. So the children from low conflict homes have experiences of fighting ending up with more love and connection than before the fight. Their brains are not set up to protect them from the instability and fear, because their experience of being exposed to fights is that things are okay in the end. Fights are not necessarily destructive or lethal. Their threat alerts act like waves, cresting as they prepare for danger, but receding quickly when they realize that the people around them have moved from antagonism to collaboration.

It’s not so much whether you fight in front of the children or not. It’s really about whether you make up, reunite, show resolution, tolerance and acceptance that counts. Fighting in front of the kids followed by empathy towards one another is actually a good model for your kids – because fighting is normal, and they will do it when they grow up and get poked by their partners. What isn’t good is the enmity, depersonalization and dehumanization that follows if there is no resolution and loving reuniting. The most important thing your kids need to see you engaging in is forgiveness of one another after a fight. Then they know that both parents are still intact and that one parent hasn’t destroyed the other with condemnation. Have as many fights as you want in front of the kids, but let them end in reparative ways – the best gift to your growing children.

How to Make Up After a Fight and Find Intimacy