Couples communication issues is by far the biggest impetus that draws partners into couples therapy.

One person describes the frustrating experience of not being able to get through their partner’s wall, no matter how hard they try. Then the other one says there is no point listening because they know exactly what’s  going to be said, and it’s all a load of nonsense!

Perhaps you too have felt excluded from your partner’s life, which not only angers you but leads to misunderstandings that have long term implications for how much you trust one and other.

Often one member of a couple comes into therapy already having ‘given up!’ They start off with, “what’s the point?” and nine times out of ten it’s the opening salvo in ensuring that no one is going to get past each other’s defensive moats.

But what may surprise you is that despite the fact that you feel like there isn’t any communication going on, THERE IS, and plenty of it.

How? By looking and talking to each other with your bodies.

She is furious and closed off, he is unawre and in his own world

Let’s take the example of 35-year-old Rachel, a staff writer at a local paper, and 39-year-old Byron, a travel agent. They came into couples therapy having barely spoken to one and other for the past few weeks. They were tense, awkward and eagle eyed with regard to being scolded, dismissed, misunderstood and unfairly blamed for the distance between them.

Byron sat in one corner of the couch putting his torso firmly into the crook of the armrest, with his legs splayed out in front. His arms were folded across his chest and he looked out the window. Rachel sat in the middle of the couch, upright, with her body arched toward me, her hands twisted in her lap, and her face a ball of anxiety. There was no eye contact, but their bodies were sure saying a lot about how each looked to me the therapist, to mediate in a long standing battle where neither side acknowledged the other’s experiences as valid. 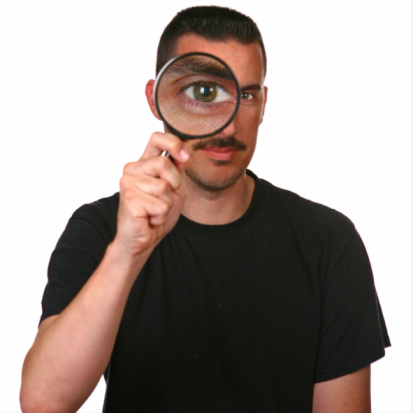 Rachel and Byron rarely made eye contact in their sessions unless I suggested that they might benefit from doing so. When they did, either Rachel felt put down and averted her gaze, or Byron felt scolded and dismissed, making him turn away, dismissing her back.

This couple didn’t know how to look at one another with their eyes or their bodies. But with encouragement and prompting, they began to hold each other’s gaze for the tiniest of moments, acknowledging the hurt and pain both felt.

holding shoulders and chin inwards, suggests a lack of involvement

Byron often sat with his hands behind his head, leaning back off the couch so that his entire torso was as far away as possible from Rachel. He frowned, looked up at the ceiling and spoke as if Rachel wasn’t there. He didn’t check to see if she heard anything or what if any her reaction was. It was as if his body was saying that he needed to be free and just speak his mind, without having a comeback.

Often while he spoke, Rachel would tear up, and suck in her cheeks, holding back her anger about the way he experienced their interactions. Filled with unexpressed anger, Rachel had no room for Byron’s feelings or experiences. She heaved a big sigh just at the moment he was about to disclose his experience of her in a recent situation. It was a message telling him that she was fortifying herself for the onslaught, but Byron missed those signals and just ploughed on- until I alerted him to the fact that there were two of them in the room, and that if he truly wanted to heard and understood he needed to check in and see if Rachel was receptive – which clearly she wasn’t.

Rachel was giving big hints about her displeasure in what he was saying and shut down when she realized that he was inattentive to her reaction. She didn’t want to talk when I invited her to tell Byron how she heard his words. She felt unimportant and decided to act that way too, hunched, squeezing a tissue in her hands, but not speaking. The sucking of her cheeks signified holding in anger.

One of the few places where Byron and Rachel did communicate with their bodies was with their legs. When they first sat down on the sofa in my therapy office, Byron’s legs would be facing toward her legs, and Rachel’s knees and legs almost touched those of her husband. Byron usually had a posture of legs outstretched, while Rachel sat wither legs straight under her, but with her feet crossed. Each was giving a mixed message – letting in some connection but with protections firmly in place.

When Byron felt misunderstood and angry he would retract his legs, pulling them away from Rachel and tuck them under the sofa. Sometimes he would put one leg over another, as if he was hugging himself against Rachel’s characterization of him. She didn’t notice. Her body would respond by facing turning towards me, and her head would shift from looking at Byron to looking at me, or looking down while she heaved a big sigh of “here we go again!”

Byron didn’t speak his anger or frustration, but his body did. Rachel didn’t speak her exasperation, but her body yelled it out for her. The problem is that neither of them tuned into these vital signals either in themselves or the other.

As I helped them address their communication issues by directing them to put words to their body language, Bryron began to look at Rachel more often when she spoke. Rachel took the risk of sitting closer. Once or twice they held hands loosely. One time Byron had his arm across the top of the sofa just where Rachel sat, as if he was embracing her, but without touching. Their bodies were now talking the talk of safety, receptivity, and acceptance with less judgment.

In each successive therapy session I pointed out how their bodies were their emotional voices, encouraging them to be aware of their own feelings and take the risk of putting it out there in words. I often had to help them find the right words because they both lacked the vocabulary of emotion. Slowly they advanced to a place where they checked in with themselves about their feelings and included it in their otherwise accusation-defense-shutdown places.

The next communication issue I addressed with this couple was their initial approach towards one another. Check the next blog post and YouTube video for that adventure.

Does your style of eye contact impact your relationship satisfaction?