Are you caught in a relationship triangle with your mother and father, having to choose sides and loyalty? Maybe you are trapped in a triangle with a parent and a step parent; or with a partner and his or her ex; perhaps you are pinned into a triangle with your partner and an interfering parent-in-law. Maybe you remember hating your baby brother sister being born, disrupting the neat triangle you had with mom and dad all to yourself. Whatever the make-up of the triangle – it is ubiquitous in relationships and causes stress, dysfunction, sickness and stalemate.

If the relationship triangle isn’t successfully encountered and managed, then the future is set to continue to attempt the appropriate resolution by repeating this pattern of triangulation in all future relationships. Some of the ways you may find yourself attempting to negotiate the passage through the initial triangular relationship are outlined below.

The relationship triangle begins as soon as a mother and father have their first child. The new baby produces the relationship triangle that makes dad feel left out – jealous of the often-impenetrable bond between his lover and his child.  The roots of feeling envy and rage in the face of helplessness and powerlessness is an intense human experience that the father has to get through. Mom has to find a way to allow her mate back in; and baby has to learn how to live with not being the only one in mom’s life.

Think about how these early days of a new baby’s birth create the soup that gets stirred in all future relationships. The sense of being important or valued starts here; as does trust and safety about depending on adults to meet your needs – how much to depend on them and how much to avoid disappointment and rejection.

The Relationship Triangle – husband, wife and families of origin

Evelyn a 35-year-old medical technician thought she had found the ideal man who she could trust to be around – someone with whom to start a family. Farouk, her 33-year-old boyfriend also wanted to find a woman he could trust never to abandon him, and Evelyn’s sense of loyalty to her parents appealed to him. He wanted to be his own man and leave home but felt guilty about deserting his sick mother. Evelyn had never left home, and in return for taking care of her parents’ affairs, she lived rent free. But she was itching to break away and feel comfortable with Farouk in their own place.

They found a place and moved in together, enjoying doing it up. At first the joy of being free was intoxicating, until the guilt of leaving their parents darkened their blue skies. But the slightest tiff or rupture between them was scary. Each thought the other was no longer reliable and that at the end of the day, the only ones they could count on were their parents, establishing the relationship triangle dynamic. Evelyn went back to asking her mother to approve of her ideas and decisions, maintaining the dependency link. Farouk would go to see to his mother every time she called complaining she felt bad. Each one fell back on their security blankets, as imperfect as they were – fostering the relationship triangle.

Their family of origin became the third point in the relationship triangle. Evelyn would threaten to leave if Farouk didn’t give so much of himself to his mother, while Farouk would accuse Evelyn of needing mom to prop her up. That third point in the triangle shifted between their families of origin – acting as the buffer between the couple who were too afraid to fully trust and feel safe with another adult person.

Each one was stuck in the transition between separating from parents and being an individual in their own right. They were not ready or equipped for a mature adult relationship. So, they had an on again -off-again relationship which kept them frozen in the relationship triangle, unable to develop or grow.

Since their parents were complicit in keeping their kids in a co-dependent relationship with them, the couple were unable to find the drive needed to get into their next phase in life. Attending individual therapy to deal with the co-dependency was the first step in feeling safe to have a relationship outside the parental one.

If you want to watch and hear about the relationship triangle with families of origin you can follow this link: https://youtu.be/OV6x_hyYRQk

The Relationship Triangle – husband, wife, and the ghost of a past love

Julia, a 40-year-old manager of a residential home for seniors married Duane, a 42-year old personal trainer after living with him for three years. She had supported him through a rancorous divorce and hoped to relax into a relationship with him that was more stable and secure. Each time he went to workshops, conferences and networking events, Julia assumed he’d be looking for someone similar to his ex-wife – making him feel the drama and excitement that his marriage provided. She assumed that Duane was bored with her, and kept searching for it outside the marriage by having affairs.  The relationship triangle formed in her mind was made up of herself, Duane and the ghost of his ex-wife whom he often spoke of as “a hell of a woman.”

You can watch a video about the relationship triangle about ghosts of the past if you follow the link below. 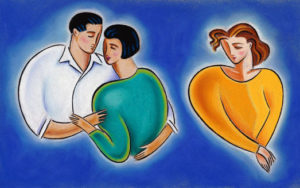 We are all familiar with men who live with one woman and have another on the side, sometimes for long periods of time. Why does this relationship triangle stay in place for years? You might feel sorry for the wife and see the man as a rouge, while hating the mistress. But all three of these people in the relationship triangle get something out of it. It’s not just that the guy can have his cake and eat it; it’s the excitement of being fought over by two women – even if his wife ‘doesn’t know’ about the “other woman.” She feels his absence and so fights for him as does the mistress.

Nolan a 41-year-old script writer was a married to Simone for 12 years, with a mistress, Alycia, of 10 years. Each woman knew about the other and fought over Nolan. He’d promise Simone that he would leave Alycia but do nothing and repeat the process with Alycia. As a child Nolan was fought over by his mother and grandmother. He developed a fear of being swallowed up by one or the other, and coped by avoiding commitment to one woman. Simone grew up feeling less loved than her siblings and found Nolan – someone she could work on to make him put her top of his list, compensating for her lack of control in her childhood. Alycia grew up with an alcoholic father and an absent mother. Basically, both her parents were absent and negligent in parenting. She was attracted to Nolan because he fitted the template of her childhood – being absent most of the time, but when he was present, she was spoiled and made to feel special – a treat she never got as a child. So, each one had some need served in this relationship triangle. You can learn more by watching this video.

You can watch this video for more information

In a cold and distant relationship between a couple, they often use a substance such as alcohol or drugs to maintain distance between them.

Every evening when 38-year-old Preston came home from work, he went right for the whisky. He didn’t respond to his 32-year-old Nadia’s checking in on him or her spilling her stress of the day. Later in the evening when Preston had unwound and felt looser reached out to Nadia wanting affection and ready to share his day with her, hoping she’d be interested and listen without judgment. But she complained of being busy and brushed him off. She wanted to punish him for not being available earlier in the evening. The third prong of the relationship triangle switched from being alcohol or being busy. Both ensure that the couple avoid their fear of intimacy using the wedge of alcohol and being busy. They want each other but they don’t want each other and the best way of having both is the use of these ‘third’ parties to have both in the only way they can tolerate. This relationship triangle can benefit from therapy for intimacy issues.

You can watch the video below for more information