Home/Anger Management Counseling, Parenting Counseling/Is envious anger stopping you from connecting with loved ones?
Previous Next

The whining started again. What did Lynn want this time? Vicky hadn’t long since got him settled with his toys after his swimming lesson. But he couldn’t keep himself occupied for more than a few minutes. Vicky took her 7 year old son to the park hoping to get some peace from his constant cranky demands. A bit of time to herself would be so wonderful. Lynn soon got tired of the swings and slides. His mother gave him his favorite snack, carefully prepared for their picnic, but he yelled for an ice-cream as he heard the musical van stop by. The harder she tried to entice him with the snack the worse his tantrum became.

Vicky was acutely embarrassed in front of other mothers in the park. The only thing she wanted to do was shut him up and look good. She lashed out loud and forcefully, ” shut up, did you hear me? Shut up or I’ll take your game boy away and there will be no ice-cream for a week.” She pulled him by the arm as he screamed and cried, threw him into the car and ignored his howls of protest. The other mothers and nannies must have thought she was a monster.

Vicky’s Guilt Makes Her Want To Be the Fairy Godmother

Lynn’s uncontrollable sobs felt like accusations. Vicky translated the crying into ” you’re mean and cruel, you’re a bad mother, he will tell his father and his father will take his side.” Then came the guilt. It came in torrents. She couldn’t get home fast enough, cuddle her son, kiss him to death and give him whatever he wanted. She apologized, vowing never to upset him like that again. The monster begged for forgiveness, desperate to be to turned into a fairy godmother.

The whirring of the garage door opening and shutting caught Lynn’s attention. “Daddy, daddy, daddy!” he announced running to grab his father around the legs. Kyle greeted his son as Vicky finished setting the dinner table. ” Mommy was so mean to me, she pulled my arm, look see the mark. She’s always yelling at me!” Kyle consoled his son and promised to ‘talk to mommy.’

Vicky Is Cast As The Wicked Witch

Vicky was near ready to burst. How dare her husband take Lynn’s side? He should try taking care of their ungrateful son. Kyle had no idea what she went through, yet he was so ready to cast her as the wicked witch. She tried to put things in perspective to ward off her husband’s criticisms. ” He was fine a minute ago. He was watching television and having fun, until you got home, then he got his big crocodile tears out, because he knows you fall for it.” Vicky complained as she began her defense.

” You are making Lynn sad and unhappy. Why can’t you be kinder to him? He’s only a child!” Kyle scolded as he poured himself a drink.

Vicky Remembers Being Humiliated By Her Parents

” If you are such a saint, you deal with him!” Vicky said. She got in her car and drove aimlessly, tears streaming down her face. Scenes of her own childhood came in and out of focus, like the time when her father screamed at her for wanting a dress like her sister’s, humiliating her into silence. She remembered the time when she had been eying the last peach in the fruit bowl, salivating at the thought of eating it that night after dinner, only to watch her mother take it and give it to her dad. 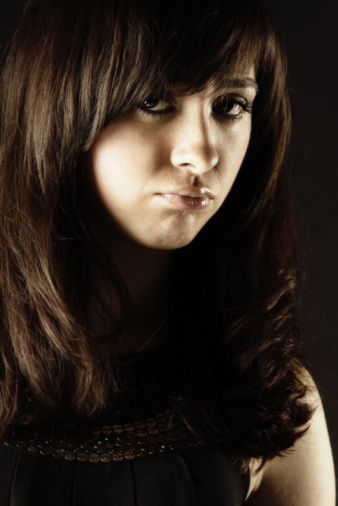 Vicky Realizes She Envies Her Son

Driving along in a state of utter despair, Vicky realized that she resented her son. She was actually jealous of him. Why did he get so much, and why had she got so little? Why did she have to fight for attention, while her son got it just for being her child?

As a mother Vicky wants to do the right things and give her son the kind of life she never had. She wants to be the parent to her son that she dreamed of having herself. Usually Vicky is a good, responsible mother. But when Lynn isn’t satisfied with her thoughtful sacrifices he turns into her ungrateful father, getting all the good stuff, and she becomes the envious child wanting to spoil his fun.

Vicky’s envy gets in the way of her fulfilling her role as a good mother. Unresolved jealousy prevents her from joining her husband as part of a unified child rearing team. She can address these obstacles by being kind to herself. It is a foreign concept because she has so little experience of receiving it. She may confuse it with selfishness. As it becomes easier, the guilt will lessen. Vicky’s gift to herself will enable her to be more tolerant both of herself and her son. The pain of her childhood will subside, as a new spirit of generosity cements the family bonds.

Why you should be grateful for the things you hate