Home/Anxiety Treatment/4 Ways Your Partner’s Anxiety Style Causes Conflict in Your Relationship, and 4 Ways to Solve it
Previous Next

Have you ever felt that your loved one took out their anger, frustration and anxiety out on you?

Do feel like a walking target for your family member’s angst with the world, just because you are there?

Maybe you have spoken up and said that you don’t want to be their dustbin and or punching bag, and yet it has stayed exactly the same. You continue to feel the butt of your loved ones stress and worry and anger that their world isn’t right. There is a constant undercurrent of tension and conflict in your relationship and you can’t seem to fix it.

There is an explanation for your partner taking it out on you.

It all hinges on your loved ones Generalized Anxiety Disorder,  (GAD). This disorder is the cause of more marital conflict than any other major anxiety or mood disorder. Those who suffer from it worry constantly, but the way they express it in their personal relationships varies. Research, reported in the Journal of Abnormal Psychology, 2011 describes four different styles of interaction that GAD sufferers use, impacting marital conflict.

You may be seriously impacted by your partner’s way of showing their anxiety, and if you recognize it in one of the examples below, you can use that information to manage your conflicts more peacefully.

Anxious about being accepted into the elite management group at his Internet Company, 33-year-old Noah seemed to walk around with a permanent frown, living in a world of his own.  His 32-year-old wife Tori, a pastry chef at her own café, complained of being met with angry and mean remarks when she tried to engage him in day-to-day conversation. Tori didn’t know what she had done to deserve being treated this way, especially as she had been the one to encourage and support him in his efforts to climb his career ladder. She had made allowances day-in and- day-out when he didn’t join in family activities, busying himself with boning up for work hurdles. It hurt her deeply that she was carrying the weight of family life, and it wounded her in an already sore spot – her need for physical contact. His words of attack were the only thing she received, and it stung.

Noah is a great example of a person with GAD who expresses his anxiety in his most intimate relationships by being cold, and harsh. In his place of heightened anxiety, the world seems a threatening and unpredictable place. Any change in his experience of the world could make him feel inadequate, unacceptable and a complete failure. So he had to make sure no one, especially his wife, could penetrate his safe zone. Tori had a way of finding just that spot that made him feel like a loser, and all those other awful feelings cascaded like a gushing waterfall, drowning him in fear and shame about not cutting it.

His cold way of expressing anxiety turned the couple in warring factions. They were constantly on guard for a surprise attack, armored up to take the blow. Not a good recipe for togetherness, tenderness or touch.

Solution: Talk to him about his fear of failure and sense of inadequacy. As soon as you name it you can discuss the impact it has on each of you, coming up with healthier ways of feeling good enough. Go to couples therapy and discuss the impact on the relationship – open up a dialogue and learn a new language to talk about rather than fight about the hash and cold way anxiety destroys the relationship. 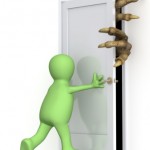 Looking forward to having her partner home after the work day, twenty-nine-year-old home maker Kendra, texted Romero, her 31-year-old man and asked if he was on his way. He didn’t respond because he was in a meeting. Kendra’s anxiety kicked into high gear. It was as if she was invisible and forgotten about. Her texts became more urgent, fast and furious, using up that adrenalin caused by the anxiety. When he finally got home, she kept asking if he was okay, and whether he liked her hair, the food she made, the DVD set she bought for him; desperate for an update on whether he was “okay” – and therefore available to him.

He found it all exasperating, and ignored her frantic efforts to pierce his personal space and invade him. But his shield only made Kendra’s anxiety worse. She kept intruding on him – in the bathroom as he got washed and changed and then again as he ate. There was no room for him to unwind and relax. Eventually he blew his top and went into his home office, put on his headphones and watched a movie online. Kendra became frantic. She needed to be center stage in his mind, but at every turn he was avoiding her. Within ten minutes Romero was interrupted with the news that the faucet sink was leaking, that their DVD player wasn’t working and umpteen ‘check-ins’ about whether he wanted a coffee.

Kendra is an example of a person with GAD whose anxiety comes out in a way that intrudes on their significant others personal space, thoughts and actions. The intention is to take their partner’s attention away from everything else, and put the focus on the anxious one, creating a feeling of security and safety as the attachment feels more real. However her way of doing it unsettled Romero, who instead of finding a way to reassure and comfort her with a connection, escaped instead. Kendra’s manner of addressing her anxiety backfired, causing conflict and distancing. Hardly conducive to a warm and empathic couple relationship.

Solution: Become a mirror for Kendra’s fear that she doesn’t exist unless she is in your face. Each time she intrudes tell her that she is anxious you will forget her, and then give her times when you are available to help her feel more secure. Go to couples therapy and learn about the triggers that make her anxious and intrusive and how your responses may reinforce rather than calm it.

Seeing her 10-year old daughter scolded by her dad, Tamara, a 28-year-old medical insurance agent felt anxious. One part of her wanted to comfort her daughter Holly who had lied about her homework, but a bigger part of her didn’t want to get involved. She was anxious about upsetting her 31-year-old husband Liam, a film set gopher, and losing his love. She stayed quiet and got on with clearing up after the evening meal. Her heart raced when her daughter asked her to take her side. She opted out, being non-committal. When Liam attempted to get her to back him up, she wriggled out, not wanting to be part of the parental discipline machine.

Holly felt let down and betrayed by her mother’s apparently uncaring attitude, while Liam was furious about being turned into the ‘bad cop’ parent. He was disappointed and felt alone in the parenting arena.

However awkward the sensation of being noncommittal, Tamara avoided the consequences of upsetting or hurting the two people she loved most in the world. She allowed them to call the tune and went along with whoever was ‘driving’ the scene in the moment. If Tamara wanted to go to the mall, then that’s where they went. If Liam yelled at her for not putting gas in the car, she allowed it, apologizing rather than sharing where she was coming from. Her anxiety about losing the thread of connection with her loved ones, turned her into a placid ‘non-person,’ allowing them to control her life.

Tamara is an example of a person with GAD who deals with her anxiety about upsetting and therefore losing loved ones by being nonassertive – effectively eliminating herself as a separate person with a mind of her own. She believes that if she stands up for herself no one will tolerate it and she will be abandoned. However, her stance simply makes them angry, disappointed, resentful and upset that they don’t have a partner or a parent! A poor set of ingredients for a strong, healthy and resilient adult romantic partnership.

Solution: Show Tamara that you are aware of her fear that she might lose you if she showed up as a person in her own right. Tell her that by not showing up she is the one cutting the ties! Go to couples therapy and learn how to encourage her assertiveness in a safe way.

Logan, a 27-year-old mechanical engineer hated bureaucracy. He put off renewing licenses, filling out administrative paper work, and most of all he loathed anything having to do with lawyers and courts. When it came to claiming on insurance for out of pocket medical bills, or household losses, he couldn’t face it. The thought of any interaction with these agencies made him feel anxious, inept and overwhelmed.

His partner Michelle, a 30-year-old grant writer got upset when Logan left things till the last minute and then got really worried, coming to her to sort things out. His anxiety made him nauseous, his hands shook, and to all intents and purposes he was debilitated. Concerned for Logan, she tended to his discomfort and soothed him by telling him she would take care of things. She completed all the transactions that needed to be done if they weren’t going to be without insurance, or be penalized for late payments.

Logan is a person who expresses his anxiety about not feeling competent or adequate to exploit loved ones into caring of him, so he can rely on them and feel secure.

His anxiety is relieved as soon as he can depend on Michelle to take over and make him feel okay about it.

Logan is relieved of his anxiety two-fold. First he got the reassurance and loving concern he needed when Michelle attended to his nauseous feelings, and trembling. Second, he managed to pass on his jobs and have them completed.

From Michelle’s point of view, her initial concern for Logan turns into annoyance, a feeling of being used, and eventually resentment and hate. Their relationship becomes one where Logan is dependent on Michelle. It is out of balance and unstable.

Solution: As soon as you become aware that you are being pulled into doing things that Logan has left undone and that are now urgent, remember that it is a sign of being exploited by his anxiousness. Let him know that you know he is depending on you to take care of things, and that you will for now. Go to couples therapy and start a conversation about Logan’s dependency needs so that he no longer has to get nauseous and tremble to justify them. Talk about your needs and how you want them fulfilled, so that you both get to a place of interdependency – a healthy balance.

Is anxiety your relationship glue?

Two ways to avoid the shame of being needy