Stress and difficulty accepting help can make your hair fall out!

Home/stress/Stress and difficulty accepting help can make your hair fall out!
Previous Next

Stress and difficulty accepting help can make your hair fall out! 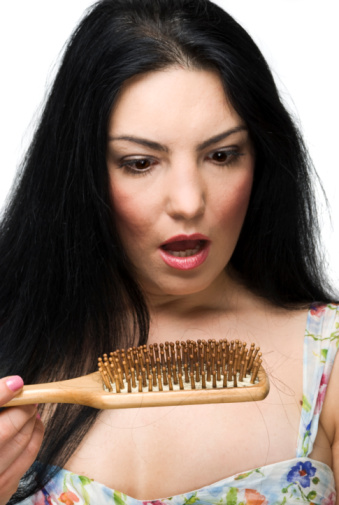 Nia was stunned when her perfect relationship ended

Nia was on top of the world. Her job was going well, and she had the best boyfriend any girl could ask for. He was attentive and affectionate. He was interested in her ideas and opinions. He showed respect for her family traditions. She felt important and needed when she supported him through tough times. His gratitude was genuine making Nia believe they were a solid couple.

The beginning of the end came the day Nia’s boyfriend didn’t take up her offer of caring for him when he was ill. Within three weeks Nia had lost her boyfriend and her hair fell out in clumps. Nia’s first response was shock and disbelief. What had suddenly changed? Why did he want to be close to her yesterday but not today? Was he hiding something? Did she miss something?

Nia’s hair started to fall out causing alarm and embarrassment

Nia’s shock turned to alarm and fear when hair fell out in the shower, and covered her pillow after long nights of fitful sleep. The back of her jackets and tops trapped her falling hair, sending her into a tail spin. Lack of appetite was a blessing in disguise because she lost weight without trying. Losing sleep was a nuisance but it meant that people would notice her haggard looks and offer some consoling words. But losing her hair in such large quantities was beyond her ability to fathom. She had heard about stress causing hair loss, but she never thought that a relationship breakup would do this to her body and appearance.

Nia was unprepared for the stress of relationship trauma

Nia couldn’t talk to anyone. She didn’t want to worry her parents as her father wasn’t in the best of health and her mother was concerned about him. She was the eldest child and always taken care of her younger sister. She didn’t feel she could turn the tables on her sibling. Everyone thought she was the strong one of the family and had always relied on her to take care of things.

Nia had prided herself on managing relationship problems within her family. She saw how difficult it was for her mother and sister to recover from distressing events and took care to be self-sufficient and in control. Taking care of others was her way of being attached and feeling valuable. She was great at listening to the feelings of family, friends and of course her boyfriend. She bolstered others, leaving herself prone to unforeseen stresses without adequate coping mechanisms.

What’s the research got to say on stress and Alopecia?

Nia’s relationship breakup triggered Alopecia areata, hair loss from the scalp that occurs in certain areas of the head, known as ‘spot baldness.’

A 2004 study reported in the International Journal of Dermatology confirmed many others that found links between a stressful life event triggering the onset of Alopecia.

A 2007 report in the European Journal of Dermatology found that 65% of Alopecia sufferers had at least one stressful event immediately preceding hair loss. Relational and family problems were the triggering events in almost 50% of cases.

What’s the research on the psychological profile of Alopecia sufferers?

A 2003 study reported by the Academy of Psychosomatic Medicine found that Alopecia sufferers were less likely to have good social and emotional support systems.

Difficulty labeling and talking about their feelings (alexithymia) was more likely in Alopecia cases.

Insecure attachment was more common in Alopecia cases, in particular the dismissive insecure style which can block nurturing from others. Those who are ‘dismissive’ in their attachments tend to fear let downs and protect themselves by pushing away potential supporting connections. They don’t trust others to be consistent and reliable in their care, so they push them away before the let down can happen.

What were Nia’s risk factors for responding to stress with Alopecia?

Nia didn’t have a good social or emotional support system. She was the support system for her family and her boyfriend. That was a big vulnerability factor for alopecia. Many people with insecure attachments tend to become care takers for loved ones so that it keeps them close both physically and emotionally. But due to inconsistent and insufficient care from their others, they learned to do without. Nia fell into this category. She had grown up taking care of other people’s feelings and had never learned to notice her own until they became as visible and serious as hair loss. That meant that she had not developed the language of emotion for herself, and had no way of expressing the shock and hurt of the relationship break up. A stranger to her own emotions she had little resilience and immune response when stress hit. It rocked the foundation on which she had based her interaction and attachments – hair loss did the expressing for her.

How did Nia inoculate herself from future relationship stress?

It was the alopecia that brought Nia to psychotherapy. She talked about everyone else except herself for some weeks. The breakthrough came when she discovered how hard it was for her to receive nurturance, support and understanding. Slowly allowing herself to receive the appropriate care and support in therapy built up her emotional resilience and allowed her to find a new boyfriend. She let him give and developed a comfort with receiving. She is now better inoculated against a stressful relationship issue, and so is her hair!

Copyright © Jeanette Raymond, Ph.D. All rights reserved.
Disclaimer: this article is for informational and educational purposes only. There is no liability on the part of Dr. Raymond for any reactions you might have while reading the article or implementing the suggestions therein. Interacting with this material does not constitute a therapeutic relationship with Dr. Raymond.
By adminla| 2017-09-13T19:52:52+00:00 August 22nd, 2012|stress|Comments Off on Stress and difficulty accepting help can make your hair fall out!