Home/Breakups and Separation/Why Can’t I Let Go of My Ex?
Previous Next

“Why can’t I let go of my ex?” you ask, gritting your teeth with anger as you deal with another wave of exasperation when there is a clash.

This is a common problem and one that often brings people into therapy. They feel that they can’t get on with their lives and want to find a way to permanently eradicate their ex from their thoughts.

Maybe you ask “why can’t I let go of my ex by imagining that they don’t exist?”

Why is it that I remember the good times when I visit a familiar restaurant, bringing nostalgic images of the ‘ex’ before thing went sour?

Why can’t I let go of my ex by erasing the past?

These questions haunt you mercilessly when you have an encounter with your ex regarding finances, children, property or inheritances. The experiences are so infuriating that you wish you could undo the entire relationship, but just keep the kids and the house!

Despite your wish that your ex no longer existed, there is a very strong emotional connection that both of you created as a pair and rely on to keep you afloat!

Sheila couldn’t let go of her ex because she had a powerful sado-masochistic connection with him!

After getting a divorce, Sheila went to therapy to deal with her disbelief and rage after Jonah’s affair. She felt betrayed, and punished him with divorce.  Five years into the therapy she was still obsessed with her ex. She felt as if she was the one being punished and unfairly so. She still fumed with frustration asking, “why can’t I let go of my ex?”

Realizing that her therapy was stagnant, she  stopped therapy with her then therapist, and started a new therapy with me hoping it would do the trick. Sheila hadn’t recovered from the affair. She talked of nothing except her ex – his every move, word, deed and misdeed in great detail. He lived inside her head and tortured her. When she remembered the good times she wanted to undo the last 5 years since the divorce and go back to the way it was.

Why can’t I let go of my ex and give up wishing him harm? 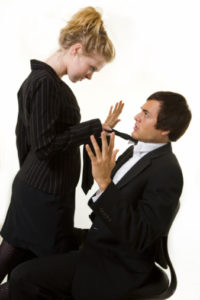 Reminded of his betrayal, she felt robbed of all the goodies she had earned in the marriage. The thought of him reaping the benefits of her efforts to make them successful  sent her into a vengeful spin. She wished he would be destroyed, and that was rightfully hers would somehow be restored. In this place Sheila became sadistic. It made her feel strong and in control again, slaying the monster who took away all her hard earned rewards. She tortured herself by imagining Jonah with another woman wanting them both to die the most painful death. Sheila engaged in this masochistic pleasure, but it didn’t satisfy her.

Soon the strong vengeful feelings would dissipate, leaving Sheila empty and ‘dead’ inside. She would withdraw hoping that her kids and or Jonah would miss her and invite her to come out and play again. She secretly hoped that Jonah would do family things with her and their girls that they had enjoyed before the divorce – and he did, often. Sheila hoped that he would regret his actions, repent and return to the way it had been before he had the affair and she divorced him.

But of course Jonah would mess up somehow, burst Sheila’s fantasy bubble and make her angry. By allowing him to be with her and the kids as if the divorce had not happened she set herself up to be hurt and wounded all over again. Stuck in her masochism, waiting for Jonah to get her out, how could she let go of her ex? She’d be left angry and asking, why can’t I let go of my ex?

When the hurt from masochism was too much to bear, especially since it didn’t yield Jonah’s repentance and return, Sheila became enraged. She directed the anger towards Jonah  with a vicious, destructive and sadistic attack. She spoke badly about him to the kids, said hateful things in texts, reprimanded him and threatened him with not seeing the kids and more. Once again she felt stronger, in charge and justified in destroying the very person she had yearned for only a day ago. Jonah’s refusal to grant her wish to go back to the good times, provided her with the fuel to get in touch with her sense of independence and self-empowerment. How could she give up her ex if he was instrumental in making her feel strong? 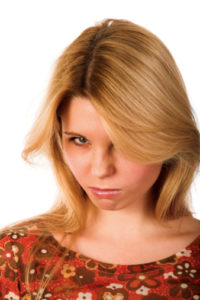 The attraction of the sado-masochistic cycle glued Sheila to her ex!

The sadistic feelings gave her a sense of self-empowerment and control.

The masochism provided a way of satisfying her need to maintain connections, and evoke care through guilt.

Sheila was locked into this cycle so she could have both her conflicting needs taken care of without having to figure it out by herself. Playing it out with Jonah provided for those needs. The price she paid was being caged – constantly playing these opposing roles, while the rest of her life slipped by. All she could do was keep being angry and mystified with ‘why can’t I get over my ex?’

How did psychotherapy help Sheila find an answer to her question, ‘why can’t I let go of my ex?

That took a long while because Sheila couldn’t believe it was the case. When she discovered that it echoed the relationship between her mother and herself, the light bulbs went on.

2.The second phase involved Sheila getting in touch with her competencies, and that was hard. She didn’t want to believe that she was capable and effective. She dismissed incidents of accomplishment as luck or one offs! But I persisted in showing her that she had skill but no will!

We examined what was so unappealing about owning her abilities. She feared being alone and lonely, uncared for if she did things for herself.

How to manage doubt and loneliness after you have broken up with your partner?

8 stages to getting past being cheated on

How to manage when 2 parts of you want different things