Six way to manage anger when you feel ignored

Six way to manage anger when you feel ignored

MORDI HAS HAD ENOUGH!

Dinner was over. Now came the awkward time. Making small talk, being effusive with praise for the hosts, and having to be entertaining for the crowd. Mordi hated it. He also hated to watch his wife sing songs and play the piano with her friends. He stuffed his irritation, told himself it wouldn’t be for ever, and tried to pass the time in a tolerable way. They had agreed before the party that when he was ready to go, he would signal her and she would bow out of the group.

IMPATIENCE AND FRUSTRATION FUEL THE ANGER

Mordi inspected every book title his hosts owned, every CD they stacked near the stereo and read a stray magazine. He looked at his wife engrossed in the choral group. He felt excluded, forgotten and invisible. Mordi made faces at her, pointing to his watch and making head movements suggesting it was time to leave. Long sighs, and pacing up and down, Mordi’s discomfort and annoyance was evident to everyone.

“One more song” his wife pleaded. Mordi was inflamed. Who was more important to Lola, her friends or her husband? That was the burning question that pushed and prodded at his hot buttons. He threatened to leave without her if she didn’t chose him there and then!

Embarrassed, Lola excused herself and left with Mordi. On the way home she asked

” Why do you always have to spoil my fun?”

“You promised we would go when I gave you the signal. You broke your promise. You made me mad. It’s your fault.” Mordi blamed him wife. 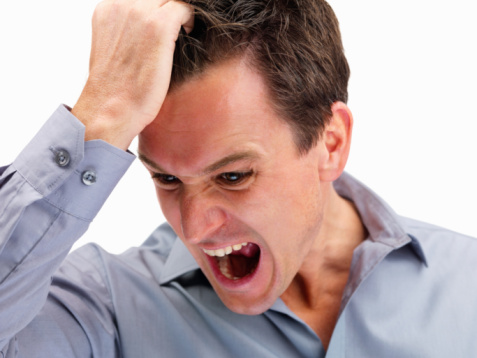 WHAT IS MORDI’S ANGER ABOUT?

Getting Lola’s full attention is desperately important for Mordi to feel worthwhile. If he doesn’t feel worthwhile he gets agitated. The agitation grows into extreme distress, and he has to do something to get Lola to see how much he needs her to make him feel better. He has to protest her absence in such a way that she will realize how crucial it is that she return her entire focus on him. The only way Mordi could do that was to create a scene, embarrassing Lola so she would withdraw from her group and return to him.

Even if Lola protests in return – even if Lola isn’t pleasant with him – he still succeeded in pulling her away from the group, and has retrieved her all for himself. An absolute necessity for managing his internal turmoil.

WHAT’S IN IT FOR MORDI TO GET SO ANGRY

Mordi’s anger comes from a very basic human fear – that of not existing. When Lola ignores him by choosing other people, Mordi feels as if he has ceased to exist for her. Imagine how scary it is to feel wiped out, insignificant and lost. The sense of helplessness is monumental. Anger is his only way of building himself up, feeling alive, experiencing power and strength. It worked! His ultimatum was successful. His wife left her group and gave him her whole being.

Mordi’s anger is his antidote to fear and helplessness. So managing it involves developing a personal sense of power and strength that stays with him regardless of Lola’s focus of attention.

A. EXPRESS NEEDS PRIOR TO EVENT

Sharing and negotiating his wishes before they go out into company will be the first step in exerting his sense of power.

1. It will make Lola more inclined to follow through

2. It will eliminate the need for the angry protest

3. It will calm the part of Mordi that is scared of being invisible

B. FILL UP WITH LOLA’S ATTENTION BEFORE THE EVENT

One reason why Mordi’s feels bereft of Lola’s attention when they are out in company is that he doesn’t fill himself up before hand. Hungry bears growl and get mad. That’s what happens to Mordi when he sees Lola take her attention away from him. Mordi can

1. Do joint activities with Lola before they go out with friends

2. Share affection, talk to and about one another – get the attention that fills the hole.

3. If the anger still comes up, Mordi should recall those moments before when they shared activities, affection and loving talk. He can bring her back to him in that way, so as to manage the anger.

Copyright © Jeanette Raymond, Ph.D. All rights reserved.
You may also like:

Three ways to stop being invisible to your partner

How to bargain successfully with your loved ones